The English Language is one very nice language that sounds pleasant to the ears most especially when one is very fluent and conversant with the English Language, and most importantly have the language’s correct accent, intonations, and tone which makes the language unique in its own way. The English Language is widely spoken by over many billions of people. This language is not owned by any particular Nigerian or African ethnic group of persons or community. In fact, ‘The whites’ as they are regarded and mostly called are said to be the owners of the English Language. Speaking the English Language is not very easy for a large number of persons worldwide. The manner at which some people murder, restructure and curve out their own English language would get you thinking and confused that it may push you to refer them back to their native dialect that you presume they should be better at. Most of these very common errors have been in existence and use for long that it is almost sounding right to many. This English Language is not ours like I said earlier, There is a need to stop the pretense and street packaging, it is a borrowed language and it definitely requires some training to be good, fluent and free of mistakes with the language, and trust me when I say many are not willing to take up such training as they feel it’s irrelevant and keep damaging our eardrums with the Everyday grammatical blunders. The amazing and amusing aspect of these errors is the fact that most people now tend to cover their mistakes with the trending lie that “They were just joking” and didn’t mean what they said earlier. Well, all I can say is “This is Nigeria” anything is possible.

Nack what please? funny enough that word “Nack” has a totally different meaning in the dictionary with the meaning it has been attached to form the statement context it is been used for. The dictionary meaning for nack is “(computing) To acknowledge negatively; to send a NAK signal to”. Therefore the right statement should be “It is 12′ o clock” or “The time is 12’o clock” so as not to get funny facial expressions from those that know the right thing to be said.

In the context in which this statement is mostly used the right statement should be ” We shall meet” or “We will meet” because we shall see statement thing is like you meant the both of you would see something together or even the common one which is a threat. it does not sound nice in any way oooh!!!

Let’s Come and be Going:

Father Lord! This one gets me weak and confused because at this point I start to wonder how a person would be coming to you and that same person walking towards you would be going back at the same time. The truth is this meant ” Let’s take our leave” and not the multitasking statement as they portray it.

You have Added OOOOOH:

This is also commonly used, and it is just a statement said when a person wants to notify the other that it seems they have gained weight. So please try to know that they just meant to tell you that ” You have gained weight”

It has Reach Afternoon already:

This sounds like one taking a journey to a place and has gotten to a particular bus stop. The right statement or rather what the person meant was” It is Afternoon”

There is nothing difficult in saying ” It is Enough” it is composed of three words too like the other which is wrong, so I would not say anyone is trying to cut a lengthy statement and is making mistakes. Speak right then.

Do I say this is the most popular of them all, There is likely not a day that passes without one getting to hear this form of introduction? are you part of those people?. Everyone is one and definitely, also the name is for just that same person no matter the number of names, so when the word replaces the is it makes it appear as though you are plural. as we all know in the English Language the word “Is” is used to represent a single thing while “Are” is used to represent something more than one. In other words, “My Name is” is the right thing to say.

He Now Come and Beat Me:

This one is mostly said by kids and many parents, siblings, and elder ones that know the right statement most times do not get to correct them, they tend to ignore with the excuse that they are kids. The truth is that is the foundation of the problem to be faced in the future, because if a child is not corrected of his wrong statements and taught the right one and how to speak well then obviously that child would grow up like that. As the adage says ” Train up a child in the way he should grow and he would not depart from it”. Therefore correct your child that it is not “He now come and beat me” but “He beat me”.

I for One Will:

Are you trying to count yourself with numbers? Then why the addition of numbers? just simply say ” I Will “ as easy as ………

I want to Barber my Hair:

This one always renders me speechless, like seriously! How can it sound pleasant to switch the title of the person to take the action into the space meant for the action? Barber is the name a person who shaves one’s hair is called while barb or shave is the action word. Pardon them am sure they had a mix up somewhere and they meant ” I want to barb my hair” or “I want to have my hair cut” or “I want to shave my hair”.

She is my junior/senior Sister:

Majority of persons are a victim of this statement, in fact, this statement has gained so much grounds that if you take it out men, women, boys, girls, are ready to face you and also argue with you. But the right statement is rather “She is my younger/ senior sister”.

I will Flash You:

Hmm!!!!! let’s not stress this one, what they have in mind to say is that “They would give you a split call” or “They would beep you”

This person is actually leaving while saying this, what this person simply wanted to say is ” I will be Back”

I will Branch at your Place Later:

There is no tree here and so there is no branch either, so what this person meant to say is ” I will stop at your place later”

At this point, I have no words to explain how these people felt to craft out these words ” I do it” it makes it sound like the person forgot that he/she has said the do before. There is no point for the repetition, and one do is enough so please be more careful so you could say the right thing which is ” I DO IT”

Go to where ooooh!!!! like it has life and can move around. At this point, they are trying to express their shock on how fast the time and they meant to say ” Time is fast spent” 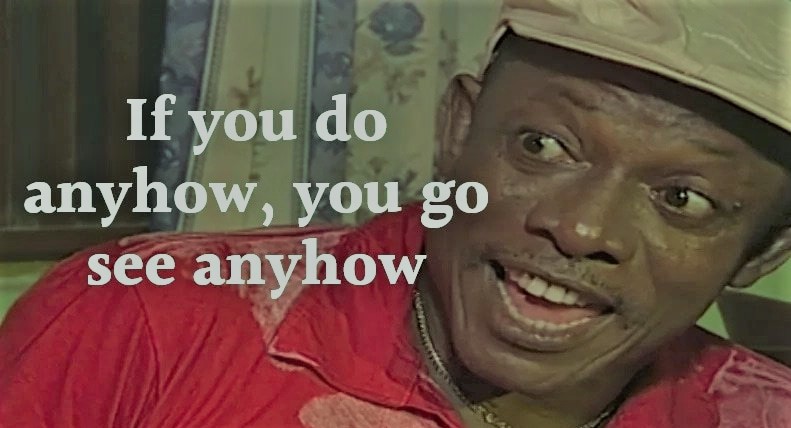